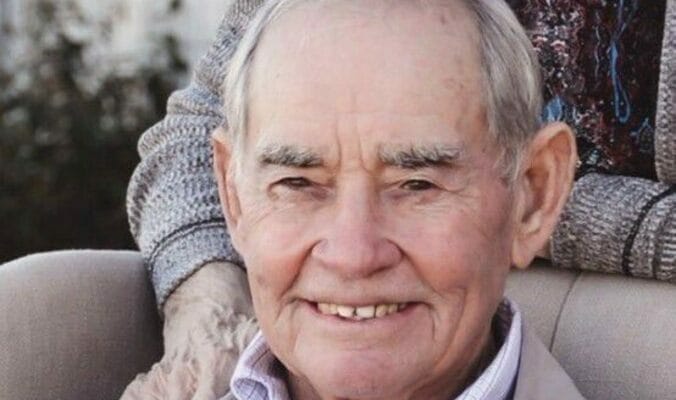 Charles Robert “Buddy” Hearn was smiling as he entered the gates of Heaven on the morning of November 15, 2022.

Buddy was born on September 10, 1926, to Johnie & Alta Hearn in the Sunnyside Community east of DeWitt. His mother passed away in 1928. His stepmother, Naomi Jackson Hearn raised him until she passed away in 1948.

He served in the U.S. Navy from 1944-1946 and while in the Navy, Buddy accepted the Lord as his personal Savior. After his discharge, he was baptized, became a member of Sunnyside Missionary Baptist Church, and was ordained as a deacon in 1955. His life was then devoted to serving the Lord, caring for his wife, children, grandchildren, great-grandchildren, farming, and helping those in need.

Buddy was blessed to have made numerous trips to Aquismon, Mexico, where he helped in the construction of “The Good Samaritan Clinic.”

Services were held at Essex Funeral Home on Thursday, November 17 at 2:00 p.m. with burial at Hearn Cemetery.

In lieu of flowers, the family requests memorials payable to Dr. John Ladd, 5723 Berkeley Drive, Tyler, TX 75707 designated for the “Good Samaritan Clinic” in Aquismon, Mexico or a charity of your choice.

Special thanks to Dr. Stan Burleson, the staff at DeWitt City Hospital and Essex Funeral Home. Your compassion and kindness will never be forgotten. www.essexfuneralhome.com