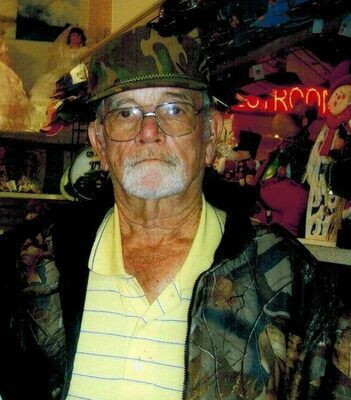 Bobby retired after 24 years of service to the U.S. Navy as a Senior Chief Petty Officer. He made it very clear that he thought every young man should do a tour in one of the military services. During his time in the Navy, Bobby toured aboard a number of A/C carriers, the longest of these were a Mediterranean cruise in 1960-61 and in 1972-73 he cruised from Mayport, FL to a battle station off the coast of Vietnam. He had previously made three short tours in country.

After retiring from the military, he bought a fishing tackle business and named it Bob's Fishing Hole. He operated the business for 20 years before returning to his hometown of DeWitt.

Bobby was a 32 Degree Mason and a Shriner. He was also a member of the Loyal Order of Moose and the Fleet Reserve Association.

He was preceded in death by his parents; his wife Martha Evers Watkins; his later in life love and best friend Phyllis Donahue; brothers Charles, Tommy, Jack, and Joe; and sisters Joyce and Barbara.

Bobby is survived by his children SanDee of Chesapeake, VA, Randal of DeWitt, and Danny of Clarksburg, WV; and many loving and caring cousins, nieces, nephews, and friends.