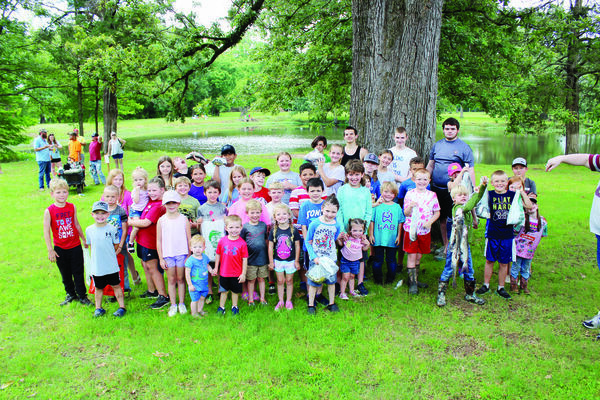 Not all of the youth were able to stay for a group photo, but these young fishermen were elated to pose with their catches and certificates! 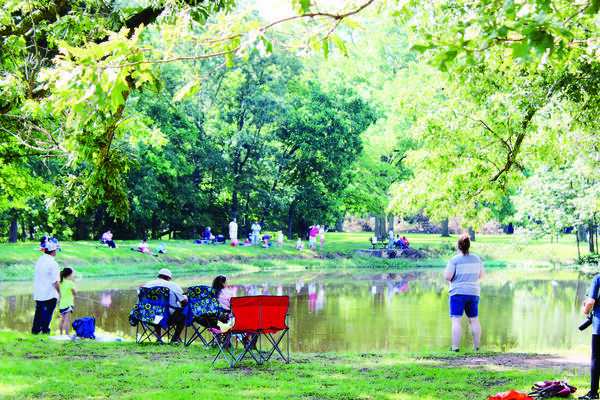 The bank at the park pond was filled with fishermen of all ages. 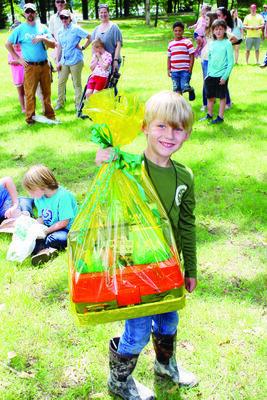 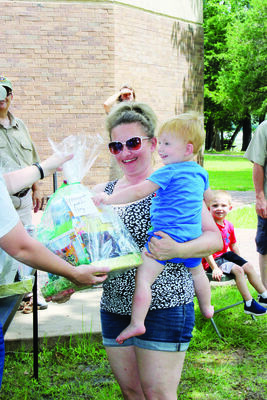 Macon McCallie was excited to win his basket! (Pictured with mom, Kirby McCallie) 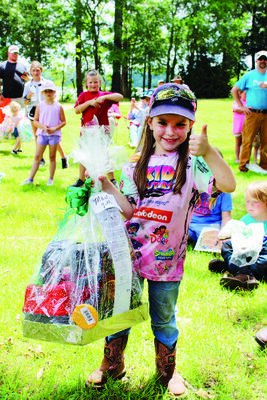 Skylar Pennington proved that girls can out fish boys, as she was the winner of the most fish caught with nine fish! 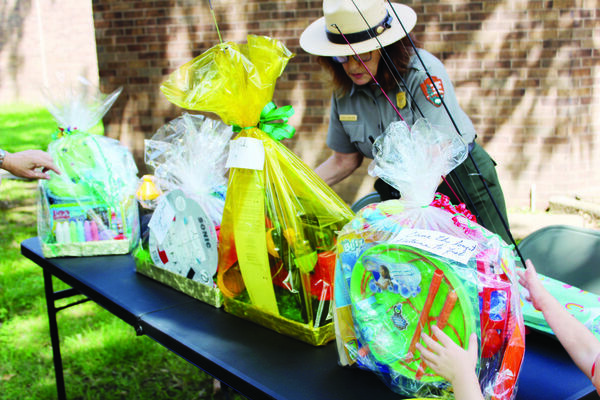 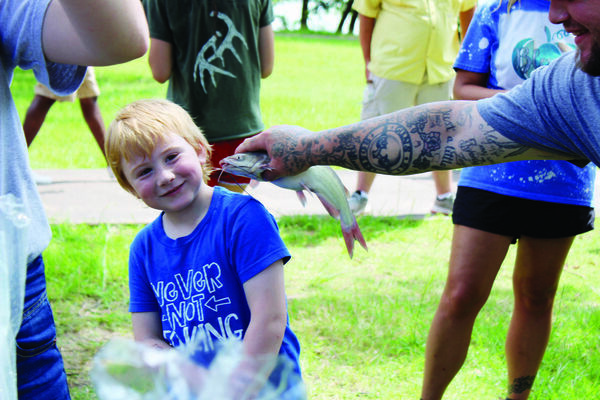 Not everyone wants fishy kisses!
Previous Next

Arkansas Post National Memorial was the place to be on Saturday, June 11, as the annual youth fishing derby was a huge success! The parking lot quickly filled and vehicles were parked around the corner leading up to the Visitor Center, as approximately 205 people attended the annual event.

103 youth, aged sixteen and under, began registering for the event at 8:30 a.m. and set up in their favorite spot as they waited for the whistle to blow at 9:00 a.m., signaling the time to cast their bait of choice into the water.

A fresh batch of catfish was delivered to the park pond on Thursday thanks to Arkansas Game and Fish, and it didn’t take long before the first catch of the day was reeled in. With their parents, grandparents, and siblings watching from the bank, the youth worked hard reeling in their catches of the day, some needing help getting the hook out of their catches, others mastering it all on their own!

As the youth fished, U.S. Army Corps of Engineers Rangers, employees of Arkansas Post National Memorial, and volunteers of the Friends of Arkansas Post National Memorial, made their way around the pond and stopped and talked with those attending the event. Ranger Erik Ball of the U.S. Army Corps of Engineers passed out bags of information to the youth and spoke to them about water safety.

At 11:00 a.m., the whistle blew again, signaling the end of the fishing derby. The youth quickly gathered up their catches and headed to the back of the Visitor Center to have their largest fish weighed and to brag about how many they caught. A couple of the anglers brought their smallest fish which were too small to weigh, so they were measured by length. Another angler came up bragging about their catch of the day, which was a good-sized soft-shell turtle! A grand total of 487 fish were caught during the fishing derby.

Each of the anglers received a certificate for participating in the fishing derby and then prizes were handed out to the youth. Winners of this year’s fishing derby were:
Most miles driven: Anna Mae Williams from Arkadelphia; Youngest boy: One-year old Macon McCallie; Youngest girl: One-year old Elena Moreland; Most fish boy: Jon McFerrin with five fish; Most fish girl: Skylar Pennington with nine fish; Biggest fish boy: Jon McFerrin with a two-pound catfish; Biggest fish girl: Josie Winkelpleck with a 3.14-pound catfish; Smallest fish boy: Kaiden Jones with a 4 inch bream; Smallest fish girl: Charlotte Kozubski with a 4 inch bream; And the winner of the Most Unusual Catch went to Delilah Crockett for her soft-shell turtle!

This year’s event was the largest on record! Although not everyone went home with a catch or a prize, a fun time was had by all!

Prizes were donated by the Friends of Arkansas Post National Memorial Group, and the event couldn’t have been a success without the hard work and dedication of the employees at Arkansas Post National Memorial, Arkansas Game and Fish for the donation of catfish, and all others who were involved in the annual event. For more pictures from the event, go to https://www.facebook.com/Friends-of-Arkansas-Post-National-Memorial-298650197341406