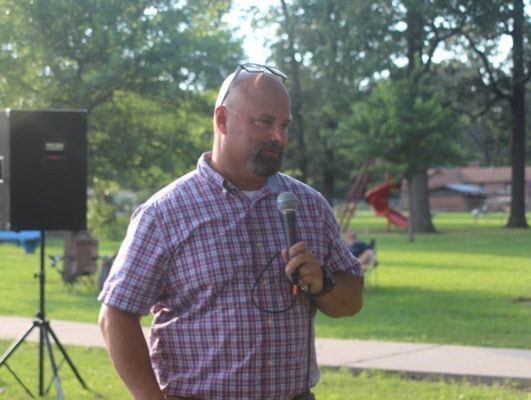 In a five-minute audio recording circulating on Facebook, an extremely disparaging and offensive term used to describe a black person was repeated over and over.

Sources claim the voice heard on the recording is the irate Arkansas County Sheriff Todd Wright, who was upset when the woman he was with spoke to a black person in a grocery store.

In the recording you hear a man, who the women identifies as Todd, call her a “n***** lover”.

“I don’t understand why you’re so mad at me,” asked the woman on the audio recording.

“Todd, you talk to people all the time,” the woman said.

Though no identity can be determined due to the blacked out screen, the verbiage of cuss words were identical to a separate video that circulated in the past that showed Wright in a rage, which he publicly apologized for his behavior on his Facebook page.

“To all I have offended or hurt, I send my sincere apologies and will pray for my enemies,” wrote Todd in a May 28 Facebook post.

Arkansas County Judge and several Justices of the Peace were bothered by the audio recording and have consulted with legal counsel to address the matter.

“It saddens me that anyone would disrespect God’s creation in this manner,” said Arkansas County Judge Eddie Best. “No way will I condone this action from anyone.”

A special called Quorum Court Meeting will be held tomorrow on Friday, August 28th at 10 a.m. to discuss the alleged actions of the Sheriff with a resolution requesting his resignation at the Arkansas County Courthouse located at 101 Court Square in DeWitt.

Editors note: Multiple attempts were made to contact Arkansas County Sheriff, Todd Wright but each attempt has been unsuccessful.