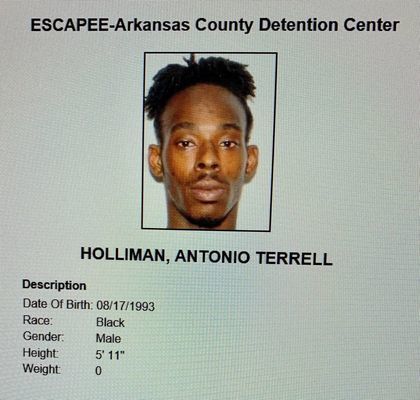 Arkansas County Sheriff’s Department and the US Marshalls are diligently working to apprehend an escaped rapist who escaped on Thanksgiving, November 28, 2019.

At approximately 6:20 p.m., a headcount was conducted at the Arkansas County Detention Center and the count was short one male, Antonio Holliman. All officers were called in to assist in the search for Holliman at that time.

After reviewing camera footage, and multiple interviews with other inmates, it was concluded that the electric lock which leads to the recreation yard had been packed with toilet tissue, causing the lock to not fully roll into position, resulting in the door being unsecured.

Inmate Holliman and an accomplice exited the back door with blankets which they used to provide protection from the razor wire. The accomplice assisted Holliman up the fence and then returned inside.

Holliman is believed to be in the Pine Bluff area or attempting to flee to his hometown in Dublin, GA. He is considered armed and dangerous and is described as a black male, with brown eyes, black hair, 5’11” tall and weighing approximately 160 pounds.

The search for Holliman is ongoing and if you have any information on his whereabouts, you are urged to contact Arkansas County Sheriff Todd Wright at (870) 830-5375.

Stay with DeWitt Era-Enterprise for updates as the story unfolds.