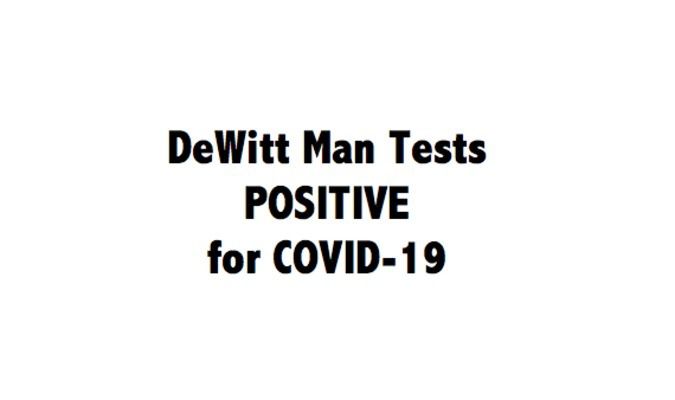 Phrases we have all heard or read over the past month and some citizens are taking them too lightly during this time - a time when COVID-19 is fiercely making its way across the state.

When it first began, toilet paper, baby wipes, and diapers quickly flew off the shelves and caused stores to be bare and unfortunately has since had to limit the number of items one person can purchase. Why the paper products were a highly-targeted item didn’t really sink in to consumers in Arkansas County at first, but now citizens are realizing just how important those items are to have on hand while they are self-quarantining.

One DeWitt man had no choice but to self-quarantine after recently testing positive for the COVID-19 virus. Around March 18, 2020, Elvis Mannis of DeWitt began feeling under the weather while he was in Illinois working. Running a fever, he began taking Ibuprofen to help control it. Congestion and frequent sneezing accompanied the fever and Mannis returned to Arkansas the following day.

Once back home, Mannis called the hotline so he could be evaluated over the phone and find a testing center. Once connected to the hotline, and after answering questions, it was determined that Mannis did not meet the criteria to be referred to a testing center. Mannis, who is 58, tried numerous times to get into a clinic to be tested, and was continually told that he didn’t “meet the criteria.” At the time, no local physicians were set up to test for the COVID-19 virus.

Mannis was asked question such as “Have you traveled out of the country?”, “Have you had a fever of 100.4 for an extended period of time?”, “Have you had trouble breathing?”, “Tiredness?”, and “Do you have a cough?” Although he was experiencing head congestion and fever, it still wasn’t enough to meet the criteria.

A week after returning from his jobsite in Illinois, and with the ongoing head congestion and fever, Mannis developed lung congestion that he said was “very deep and felt like it was in his lower lungs.” For three consecutive weeks, Mannis continued running a fever with continuous lung congestion.

Mannis was treated for a cold and given medications to help fight it off, then he returned to work, untested for COVID-19. Mannis’ daughter felt that it was more than the common cold, so she reached out to a clinic where tests could be performed and was able to schedule an appointment for Mannis to be tested on April 1, 2020.

Mannis’ test results came in on Wednesday, April 8, 2020. POSITIVE. The sickness that was running through his body was the dreaded COVID-19 virus. Mannis has been self-quarantining since being tested on April 1, except for a couple of days of isolated hospitalization due to a kidney stone.

As of Thursday, April 9, 2020, Mannis stated that he was starting to feel better. He spoke with the Department of Health and they informed him that if he is fever free for so many days, and his symptoms clear up, they will be able to release him. Until then, he will remain at home. Mannis is expected to make a full recovery and luckily, he only suffered with “mild” symptoms of COVID-19.

Junior Dragons Butt The Billies For A Win